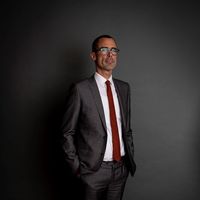 It doesn’t happen often that an evening at the theatre turns out to be a continuation of work. Straight Line Crazy at the Bridge Theatre is a quintessential urban planning tale. It tells the story of Robert Moses and how he transformed New York and Long Island. Ralph Fiennes is Robert Moses and delivers a powerful version of the city’s chief planner.

Exploring two points in his long career, the play takes us back to the 1930s when Moses set out to transform New York, building parks, tenement blocks, swimming pools, bridges and expressways. Straight Line Crazy shows Moses as a visionary and single-minded planner who follows his own instinct and doesn’t worry about public opinion.

The second part of the play looks at Moses’ undoing. We’re in the 1960s, the U.S. has undergone fundamental societal changes, and Jane Jacobs steps on the stage to sweep away Moses’ great plans for the Lower Manhattan Expressway through Washington Square Park. The big road project is eventually aborted, Washington Square Park saved, and the way planning decisions are made changed forever.

While Straight Line Crazy lacks the complexity required for a successful piece of theatre, it provides fascinating insights into one of the most famous and notorious urban planning cases of the 20th century. The dramatic powerplay between Moses and the local conservation group is gripping enough to keep the audience interested – and no doubt, today’s planners can learn a lot from Robert Moses’ fate.