Next Government revaluation postponed in light of COVID-19

The English Government has unexpectedly decided to postpone the next revaluation to 1 April 2023. The next valuation date will be 1 April 2021.

Business rates are subject to revaluations usually at five-year intervals. The next general review was due on 1 April 2021, but in the light of COVID-19, the Government has for now shelved the work undertaken in preparation.

The dilemma was: Should there be a revaluation in 2022 with a valuation date of 1 April 2020 in the middle of a pandemic with property values badly affected, at least in the short term? That would have been a poor choice for the Government.

The Government has now decided to extend the current cycle to six years to 2023. The question remains over whether this will be the start of a three-year cycle or if the fundamental review, which is now underway, will give rise to more radical reform.

Josh Myerson, Head of Rating at Montagu Evans said: “This is probably a sensible move, but signals the Government’s intention to preserve the current regime more or less in the same format at the review due to be completed in the autumn, before the Budget.

“The problem will be, however, whether the economy has properly recovered by the next valuation date in the spring. If property values remain low on the back of poor consumption and with little or no inflation, rateable values could slip. Unless the Government decides to collect less from business rates, it will then be forced to increase the charging mechanism or poundage. Either way the Valuation Officer will have their work cut out in the midst of a growing number of challenges under the current cycle.

“Ratepayers will be wary of budgets moving forward and keen to resolve any current appeals to reflect the effects of the pandemic and avoid any further delays.” 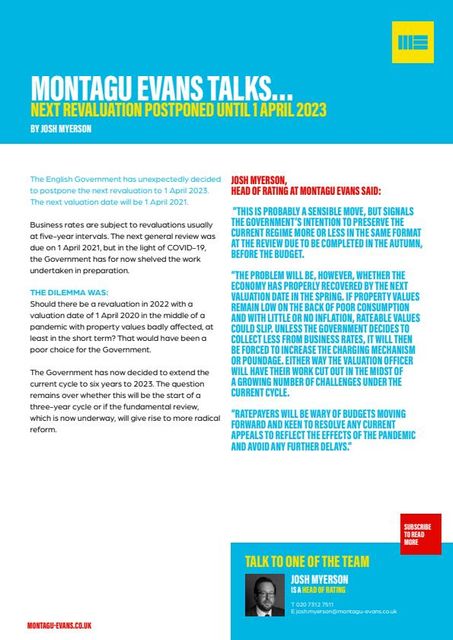